Get Your New Kicks On Route 66

Route 66 — “The Mother Road” — has become America’s longest attraction only relatively recently, and only because its businesses have learned to reinvent themselves. 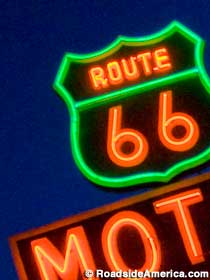 The Route 66 treadmill of one-upmanship perhaps got to be too much for Tom Schwerin, who owns Arrowhead Lodge on the eastern edge of Flagstaff, Arizona. Arrowhead Lodge has been around since the days of linen postcards, back when Route 66 was just another highway. Now the Arizona Daily Sun reports that Schwerin wants to take his vintage motel — a Route 66 mainstay — and turn it into a medical marijuana dispensary by the end of 2011.

What would The Mother Road think?

Without intending to, the Daily Sun story makes a strong case that an old Route 66-style motor court is a great fit for a legalized pot business: it has a local owner, a relatively rural location (no nearby schools or playgrounds), ample parking, and lots of little cabins for examination offices and grow rooms.

The Arrowhead Lodge may be just an isolated instance of an opportunity too good to pass up. But it bears watching. Route 66’s new breed of entrepreneurs aren’t shy about currying favor with those who travel past their doors. If any of Route 66’s classic attractions start to look like this, we’ll know that the Mother Road is in for another makeover.

Sections: Attraction News, Tourism News Comments Off on Get Your New Kicks On Route 66