Room on the Broom: New Witch Museum in Salem 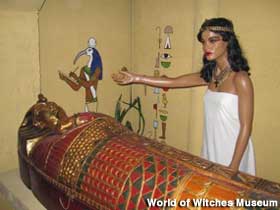 Salem, Massachusetts — site of the witch trials of 1692 — has a packed roster of witch attractions, including a statue, a dungeon, two witch trial reenactments, and two-and-a-half witch museums (one gives half its space to pirates). Now add the new World of Witches Museum to the coven — the only witch attraction in Salem managed and staffed entirely by real witches.

“It wasn’t our intention to start a museum when we moved to Salem,” said Don Lewis, “but that’s not what the universe wanted for us.”

Don, the museum curator and a Correllian Wicca Archpriest, said that the museum is geared for curious non-witches and witches alike. It’s a respectable neighbor — it was officially opened by Salem’s mayor — in an often bubbling cauldron of magic melodrama. The museum explains the long history of witchery (ancient goddesses, the oracle of Delphi, alchemy, etc.) as well as all of its many, many modern variations and activities. It even has a working witch temple, complete with altars, although it discourages casual visitors who impulsively expect to become witches. “It’s not that simple,” said Don. “But we try to be as helpful as possible.” 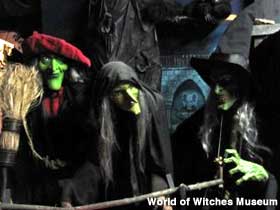 The only spooky exhibit in the museum, according to Don, is the “stereotypes” room, with dummies of green-faced Halloween hags. “We try to explain that they shouldn’t be scary.” The museum even sells pointy black witch hats, which Don said are actually ancient magical garments — as well as must-have items for any Salem souvenir shop. “Witch hats are to Salem what mouse ears are to Disneyland.”

The Museum is still adding exhibits, and hopes to install a computer terminal where people can type in their names and see if they’re related to someone accused of being a witch.

Sections: Attraction News Comments Off on Room on the Broom: New Witch Museum in Salem