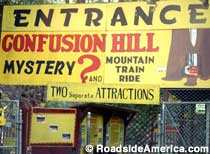 • Confusion Hill Bypass: It’s mid-April, and the press is rediscovering roadside attractions — as they do around this time every year. The Redwood Times has an article on Confusion Hill in Leggett, California, noting that the Confusion Hill bypass will open on June 25th. “We’re going to become an exit,” says co-owner Doug Campbell, “and it’s kind of terrifying.” Meanwhile, in the Amarillo Globe-News, Steve Thomas talks about his Second-Largest Cross In the Western Hemisphere in Groom, Texas. “It’s in your face. You can’t miss it. People drive by, they have to think of Jesus no matter who you are.”

• Hard Rock Park: The former Hard Rock Park, which both opened and went bankrupt last year in Myrtle Beach, South Carolina, has been renamed “Freestyle Music Park” by its new owner. He told the Sun News that the name change signifies that the park will “include many types of music” when it reopens on Memorial Day weekend. That’s fine by one Sun columnist, who wrote that the old rock ‘n’ roll park “somewhat celebrated … the worst of the outdated counter-culture,” which was “hardly appropriate for today’s families.”

• Nearsighted Eyeglass Statue: Southbridge, Massachusetts, plans to build a 20-foot-long pair of eyeglasses to honor the workers at American Optical, the biggest employer in town. Or, rather, the former biggest employer in town. “AO no longer operates in town,” notes the Worcester Business Journal. “The installation will also include a bench for visitors.” Maybe they can sit and ponder where the jobs went for eyeglasses? Maybe New Mexico?

• Wax Michelle Obama: A wax dummy of First Lady Michelle Obama has been unveiled at Madame Tussauds in Washington, DC. Normally this wouldn’t be newsworthy, except that the Washington Times and Fox News have both hinted at a conspiracy in the inclusion of Michelle rather than say, Laura Bush or Nancy Reagan. The Times quoted a Republican pollster: “If they are going to be buried next to their husbands, they should be immortalized forever [alongside] them in wax.” Well, not really — the Betty Ford hairdo mannequins at the Gerald R. Ford Presidential Museum are far more evocative than any wax dummy….