« Californian Builds His Own Giant Transformer | Main | Lincoln Linked To Billy The Kid: A Nation Stunned » 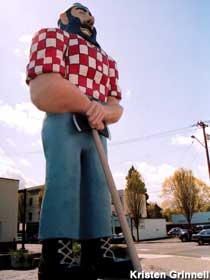 In Portland, Oregon, a big statue of Paul has just been added to the National Register of Historic Places as a “well-crafted example of roadside architecture.”  It’s only the second statue of the giant tree-chopper to be so recognized (the other is in Bemidji, Minnesota), although we could recommend many others.

On the other side of the country from Portland, in Bangor, Maine, an even-taller Bunyan statue is celebrating its 50th birthday today. “Some people say he’s schmaltzy and he doesn’t belong,” says mayor Gerry Palmer in the Bangor Daily News.  “But he’s still the most photographed site in the entire city.”   The Daily News devoted an entire article to its mysteriously missing hook.

• Stickie Lincoln: Some guy named Abe Lincoln is also celebrating a birthday.  In Springfield, Illinois, a self-described “Post-it note artist” has used 16,200 little stickies to create two 7.5-foot-high, 55-foot-long portraits of Abe.  They will be unveiled today in the windows of a pedestrian footbridge connecting the Abraham Lincoln Presidential Museum and the Abraham Lincoln Presidential Library.  “It’s very time-consuming,” the artist told the State Journal-Register.  “I’m one of the only people who do it seriously.”  The portraits will be up for only a week — far too fleeting to qualify for our Loopy Lincoln Landmarks list.

• Lava Lamp? No, Waterfall! Brent Blake, who’s been frustrated repeatedly in his attempts to erect the World’s Largest Lava Lamp in Soap Lake, Washington, has come up with a new plan to draw tourists to his part of the state.  He wants to recreate a 3.5-mile-wide waterfall that ran dry after the last Ice Age.  “We all are amazed at what he does,” said Mick Qualls of the Coulee Corridor Scenic Byway Committee to the Columbia Basin Herald.  “He’s a visionary.  We were in shock a little bit.”