• Nixon Pie: It’s Presidents Day, and anyone in the vicinity of Yorba Linda, California, should detour to the Richard Nixon Birthplace at 2 PM. There you’ll be treated to free cherry pie, presidential impersonators, and Ed Nixon, who “will tell stories about growing up in Yorba Linda with his older brother,” according to the Ocean County Register. Some presidential kid brothers have left a more lasting impression than Ed, but maybe he’ll explain how Harry Truman got his brother’s bowling ball. 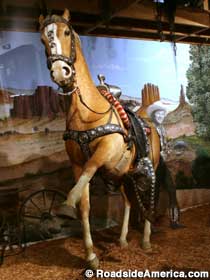 • Roy Rogers Crisis: The Roy Rogers-Dale Evans Museum in Branson, Missouri, is “on the verge of closing its doors forever,” according to the Victorville Daily Press. The Rogers family cites a lack of winter tourists (and $70,000-a-month operating expenses) as the cause of the crisis, but suggests that contributions could keep the museum afloat until a busy Spring. “Unfortunately, Roy’s generation of fans [is] not out there as much anymore” — at least not in the cold weather.

• Dollywood Gay Day Cancelled: Ryan Salyer, who since 2003 has organized the annual Gay Day at Dollywood, in Sevierville, Tennessee, has cancelled the event. “After dealing with the police, the lawyers, and the Klan’s death threats, it all just became too much.” (It might have been interesting to host the event at Dogpatch U.S.A. — which was at least Shmoo-friendly — but it has closed.) Salyer has moved to Nashville to found the Middle Tennessee Bear Alliance, which probably has nothing to do with these kinds of Tennessee bears.

• Hodag Community Art: One problem with community art projects — where an animal is mass-produced as fiberglass statues, decorated by artists, and placed around a town — is that the beasts are often not very closely related to the community (There are rare exceptions). But give credit to Rhinelander, Wisconsin, which is kicking off a “Hodags On Parade” event this year as a way to celebrate the local monster. Maybe this will also inspire neighboring Monico to do something with its monster, other than putting it in a cage.