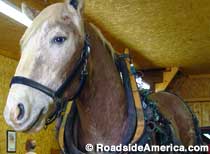 • Trading Up Stables: General, the World’s Largest Stuffed Horse, has been moved into a swanky new display stable at the Farm Museum in Point Pleasant, West Virginia.

• Doomed Ship Ice Sculpting: “As part of a continuing commitment to maximize the experience of its visitors,” the Titanic Museum in Branson, Missouri, is hosting an ice-carving competition. Hey — if the ship hadn’t sunk, the activities director might’ve organized this on the promenade deck…

• Not the Golgotha Subdivision: Plans for a big cross in Kerrville, Texas, have been roadblocked by irate homeowners, “very reasonable, God-fearing, Christian people who want to get this thing worked out and just want to protect their property values.”  Remember: Build your giant profession of Faith in the Almighty where there’s no property to devalue.

• Death Can’t Stop This Train: Despite the recent death of its founder, the World’s Longest Miniature Railroad (in Chiloquin, Oregon) plans to double the length of its track — which is already more than 29 miles long — over the next five years.  “The future looks good.”