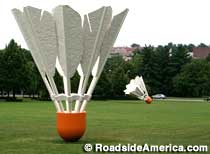 • Death of Big Things Artist-Collaborator: Modern art often fails to excite our interest, but even we can appreciate the work of the recently-deceased art historian Coosje van Bruggen, who along with her artist husband, Claes Oldenburg, made giant American landmark sculptures of shuttlecocks and spoons… and dustpans, and arrows, and erasers…

• Resurrecting the Old Man: A politician in New Hampshire wants to build a walk-in replica of the state’s collapsed Old Man of the Mountain in Franconia Notch.  “Alan Shepard went to the moon and hit a golf ball … If he can practice his golf swing on the moon, we can put the Old Man back on the mountain.”  That analogy may be strained, and we’ve heard this kind of talk before, and some previous proposals have been even more elaborate.  And New Hampshire already has a replica.  But what the heck — the more Old Men the merrier.

• Gas Bill for the Eternal Flame: There was much indignation in the press this week when the eternal flame at the new Medal of Honor Memorial in Bullhead City, Arizona, was shut off because the gas bill was too high.  Everyone had a suggestion of what to do.  Now a private business has offered to foot the bill, sort of.   “Eternal” flames are often short-lived, even if they have the noblest of intentions, and even if they aren’t even a flame at all.

• Stretched Baseball in Fiberglass: A long-time roadside statue shop, FAST Corp. in Sparta, Wisconsin, is now making professional sculptures for celebrity artist Donald Lipski — including a new 60-foot-long super-stretched baseball.  “Everyone who sees it, it’s going to grow on them.”

• Mock Sea Battle: Hoist sail for San Diego this weekend and join the crew of “a real-life mock sea battle” (with cannons) between a full-size replica pirate ship and an old Navy cutter.  Extreme immersive tourism usually scares us, but these boats look safer than other tourist pirate ships that have recently gone to Davy Jones’ locker.