According to experts in England, January 19, 2009 will be “the most depressing day in history.” The story isn’t getting much press in the U.S. (it happens to be the Martin Luther King Jr. holiday, a happy day) but it is also Edgar Allen Poe‘s 200th birthday, and he could be depressing at times.  Weren’t people more depressed during the days of the Black Death or The Inquisition?  What we need is some more happy news to turn our frowns upside down…. 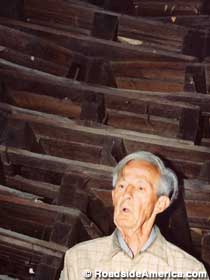 • Tower of Pallets: An apartment building is going up on the spot formerly occupied by the late Dan Van Meter’s Tower of Pallets in Sherman Oaks, California, and will reportedly open later this year.  Sad news?  Not entirely.  “Per conditions of the sale … a display ‘to memorialize the tower’ will be placed in the lobby.”

• Train Wreck Coffee Shop: We were disappointed to read that this proposed (and eagerly awaited) attraction — made from real wrecked train cars — in Bellingham, Washington, has been delayed, “but it’s not dead.”  The Train Wreck is the idea of Mark Bjorklund, co-owner of a local motorcycle shop named Super Rat.  Our favorite quote from Mark, from an earlier article: “I’m going to make it pimp.  Like, people are going to be stoked to go here.”

• Massive Coronary: America has had giant, walk-through human hearts for decades in Philadelphia and Chicago — and now it has a new one, tailored to deliver a tough love message to the flabby museum visitors of the 21st century.  “This 12-foot-tall beating heart inside the Gulf Coast Exploreum Science Center [in Mobile, Alabama] experiences a heart attack about three times an hour … to inform young and old alike about the importance of safeguarding their health.”

• Nickel Guy Honored: Ted Szilva, who built the World’s Largest Canadian Nickel in Sudbury, Ontario, has been appointed to the Order of Ontario.  “This distinguished honour is bestowed on those who have gone above and beyond, those who have demonstrated excellence in various fields of endeavour.”  Way to go, January 19, Canada!