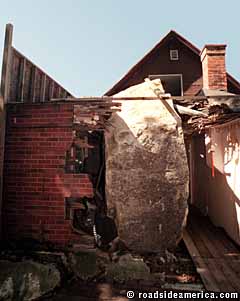 • Kids! Learn About Rocks: We’ve always been impressed by Rock in the House, a huge rock that rolled down a mountain into a Wisconsin home, hurt no one, and remains as a tourist attraction. Now comes word, courtesy of the Union Leader, of a recently rediscovered anti-rock-in-the-house attraction in Crawford Notch, New Hampshire: The Willey Boulder. This rock stayed outside of the house, split a landslide, spared the house, but killed all nine people inside because they ran outside, into the path of the landslide. According to the Leader, this is a story that “just about every New Hampshire schoolchild learns about.” Education about giant falling rocks is necessary in the Granite State.

• Boulder Border Dispute: The other big rock story in the news is the upcoming trial of Steve Shaffer, accused rocknapper, in Greenup, Kentucky. In 2007, Shaffer took an eight-ton boulder and long-time attraction, Indian Head Rock, out of the Ohio River — which divides Kentucky and Ohio — and has kept it in a warehouse on the Ohio side ever since. Kentucky claims that the rock was on its side of the river, and wants to jail Shaffer for up to five years for his supposed theft. According to the Ironton Tribune, Shaffer’s lawyer calls the case unusual, “because a person can get five years for a rock.” Kentucky already has at least one other odd rock attraction, and so does Ohio, so there’s no clear precedent here.

• Shopping with the Gods: According to the Long Beach Press-Telegram, a shopping mall in Cerritos City, California, is paying almost a half-million dollars for a 20-foot-tall shopping bag. The bag, a permanent piece of art, will be outlined in color-changing LED lights and will stand outside of one of the mall’s anchor stores. Maybe it’s not as impressive as a giant pair of cowboy boots, but it should be eye-catching. The Press-Telegram reports that the artist who will create the bag was chosen in part for his “passion for history and context.”

• Burnt Castle: A medieval-style castle that was also a mansion in Miami Beach, Florida, was recently destroyed by arson, according to WFOR-TV. Built in 1925, the castle had a moat that once held sharks. “Neighbors have always despised the mansion,” reports WFOR-TV, “but they hate it even more now” — because the gutted ruins have become a bigger tourist attraction than the castle ever was. Other popular castles in Florida, made of metal and coral rock, appear to be arson-safe.