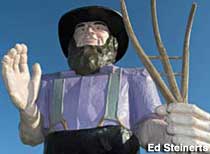 • Amos Come Home: Big Amos, the barefoot Amish giant currently in Strasburg, Pennsylvania, may be changing addresses again. For years he stood next to Zinn’s Diner in the nearby town of Denver. Now the new owners of the diner want him back. Said one of them to WGAL-TV, “If he [Amos] could speak right now he would say, ‘I want to come home.'”

• Giant Head, Pot Head: Another big man is already on the move: the giant head of President Barack Obama, which is on its way to the Black Hills of South Dakota. But when the head stopped overnight in Springfield, Illinois, a vandal spray-painted “420” on the side of its face. The cryptic vandalism may have political meaning, or it may simply be the work of a local stoner. A Springfield politician assured WCIA-TV that “this a very patriotic town.”

• Air Runs Out for Moon Walker: According to the Wapakoneta Daily News, a proposed gutting of the Ohio Historical Society’s budget will close the Neil Armstrong Air and Space Museum in Wapakoneta, Ohio. The shuttering was originally scheduled for June 30, but then state lawmakers realized that that would be 20 days before the 40th anniversary of Neil Armstrong’s walk on the moon. Now the museum will close at the end of that day, July 20.

• Middle 1800s American Idol: Wealthy horse farm owners in Lexington, Kentucky, are paying $300,000 to erect a statue of a horse on a podium in a new traffic circle in their neighborhood. The horse, “Lexington,” was a local sire who died in 1875. According to Business Lexington, whose editorial judgment may be biased, Lexington the horse was “one of the most famous living things of the middle 1800s.”