• Diseased Trust Fund Kills Funeral Museum: The collapse of a trust fund has reportedly brought about the premature demise of the Museum of Funeral Customs in Springfield, Illinois. According to a story in the State Journal-Register, the fund “had a $59 million deficit as of last fall,” putting the museum way more than six feet under. It has left us too soon, and will be missed. Whenever we see a chocolate coffin souvenir we’ll remember this museum and smile…. 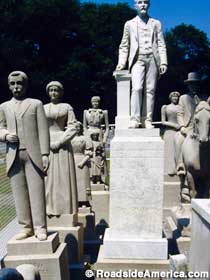 • Tree Clobbers Graveyard Family: A freak ice storm has felled a tree into the middle of the Wooldridge Monuments, an ostentatious family grave in Mayfield, Kentucky. Heads were knocked off, and only four of its 18 statues (animals as well as people) were left standing. “The trunk is so mammoth that we don’t know what kind of equipment we will have to use to get it out of there,” said the town mayor to the Paducah Sun. Mayfield intends to fully repair the damage, but for now fans of gaudy graves should detour to the Davis Memorial in Hiawatha, Kansas.

• Chief Black Hawk Returns: Good news from Oregon, Illinois: the Chief Black Hawk statue is reopen for business. The towering statue and its surrounding park were shut down last December 1 by then-governor Rod Blagojevich, who claimed that Illinois couldn’t afford to keep them open (Blagojevich was subsequently thrown out of office). According to the Rock River Star, “The barricades were removed by 10 a.m. and people were here by 11 a.m., driving through and honking.”

• It’s Official: Largest Rocking Chair: The World’s Largest Rocking Chair in Fanning, Missouri, has been awarded a Guinness World Records designation. Standing over 42 feet tall, its skyscraping steel tube construction enabled it to soar higher than rival rockers made of traditional wood in places like Deadwood, South Dakota, and Gulfport, Mississippi. Also newsworthy: the local fire department plans to use its bucket lift to raise visitors to the chair’s lofty seat for one-of-kind novelty photos on August 1. Mark your calendars!