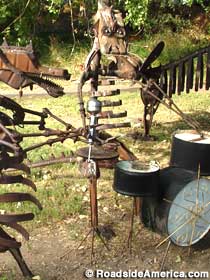 • Swetsville Zoo: A yard full of fanciful metal creatures built by Bill Swets, known in Timnath, Colorado, as Swetsville Zoo, will “close within the next five years,” according to a story in the Loveland Reporter-Herald. Development will eventually overrun the property, although the article says that the Zoo “will remain where it is, open to the public,” for the immediate future. Most of the creatures will eventually be given foster homes in town, similar to the statue adoption engineered by Woodland Hills, California, for the Old Trapper’s Lodge.

• To Soar Above the Sludge: We don’t usually cover the activities of bird watchers (unless they’re spying on giant birds). The aptly-named Wichita Eagle, however, reports on the growing popularity in Kansas of sewage lagoons as hangouts for people who want to spot a transient Canada goose or great blue heron. “Sometimes the smell gets a little obnoxious, but it’s not too bad.” We’ve received reports that the Golden Spike Tower in North Platte, Nebraska, is similarly being multi-purposed by eager-beaver Plains state birders….with less of an odor issue.

• Heartless Miami Beach: In Miami Beach, Florida, an artist named Tomy Trujillo spent over $50,000 to build two giant hearts, which, on Valentine’s Day eve, he secretly placed as tokens of affection in front of his former high school and a gallery that he liked. The city responded by hauling the hearts away to a dump. One “was crushed,” according to the Miami Herald, and the other was spared only because of “a kindly city worker who didn’t have the heart to destroy it.” In the past, Miami tolerated odd private art, but evidently not any more. “I definitely won’t put any more art in the city,” Tomy told the Herald.

• Mexican Sandman Siesta: Last November we reported on a giant “Sleepy Mexican” statue that would be built of sand and allowed to gradually erode away in the Arizona desert as a political-artistic statement. The proposal stirred up a lot of local controversy — but it turns out that people needn’t have gotten upset. According to the Arizona Republic, the big Mexican “collapsed just minutes after being removed from a mold” and is “pretty much a mudpie.” Those who want to see its ruins had better hurry; it’s behind the Tohono O’odham Cultural Center in Topawa.