« Tree House Rock: Face of the Creator | Main | Mascot War? We Want Angus On Our Side » 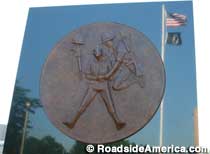 War memorials are ubiquitous landmarks in almost every American town, large or small. If soldiers die in an officially endorsed conflict, someone will erect a heroic statue or solemn monument to remember their sacrifice. But in 1977 the Vietnam War had been over for two years, and there still wasn’t a Vietnam Veteran memorial anywhere in the U.S. (the iconic Wall in Washington, DC, hadn’t even been imagined yet). Everyone seemed to forget those southeast Asian jungles, and the veterans they claimed.

Everyone except the Jaycees of Millville, New Jersey.

Seven soldiers from Millville had died in the war, and the Jaycees thought that they deserved a memorial like anyone else. The Jaycees raised just enough money to erect one — the world’s first Vietnam Veterans Memorial — and placed it on the bank of the Maurice River on Memorial Day, 1977. It was low-budget and industrial-looking: two iron beams supporting a thin bronze plate affixed with two large copper medallions. One side showed a soldier tending to a dying comrade; the other had his last words, imploring everyone not to forget. 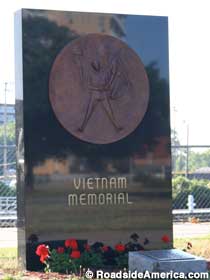 A third of a century passed. The elements were tough on the memorial. The beams, which were supposed rust to resemble the red clay of Vietnam, instead chemically reacted to the other metals, eating through the plate and corroding the medallions.

Some of the Jaycees from 1977 were still around in Millville, and they thought that their first-of-its-kind memorial deserved a second chance. They raised money. The plate and beams were thrown away. The medallions were scrubbed clean and attached to a new three-ton 10-foot-tall black granite slab (like the ones used in the Vietnam Wall). The whole thing was rededicated on September 10, 2010. It’s still the world’s first memorial to the Vietnam War, and now it should survive the assaults of New Jersey weather and unforeseen metallurgy.

Riverside Drive, Millville, NJ
Directions:
Just west of town. From Hwy 49/Main St. turn south onto Riverside Drive at the Wawa Food Mart. The memorial will be about a hundred yards south, on the left, on the east bank of the Maurice River.