Pennsylvania: Pagan As You Go

When a group of sociable Pagans decided to hold their “Celebrating Earth Spirituality Festival” at the semi-charming and vaguely Tudoresque (circa 1996) theme shopping hamlet of Stoudtburg Village, little did they know that the gathering would cause a retail revolt. An offended group of shopkeepers refused to open on that day, lest they come in contact with a single Pagan penny. Area Christians organized a “Wall of Prayer” to counteract the general merriment and express dismay at the sight of pentacle-adorned nature lovers stocking up on potpourri and scarfing kettle corn. 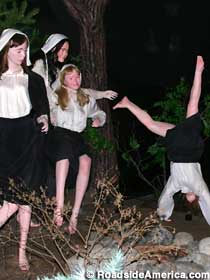 Stoudtburg Village is located in pious and picturesque Lancaster County, Pennsylvania, famous for its scrapple and Amish communities. The mock-historic commercial center (which also includes apartments–Phase II coming soon!) regularly hosts events including Rotary Club meetings, doll shows, and the suspicious-sounding indoctrination rite known as “Cookies with Santa.” It is available for rent to any group willing to cough up a very reasonable fee of $50.

Admittedly Pagans are fond of questionable practices such as clothing-optional bread baking, but in this case, the day was spent engaging in such offensive activities as “collecting non-perishable food items to help those in need.” Shocking!

As far as we know, this is the first event to spark a Stoudtburg business boycott. But may we point out that there’s already something rather Pagan about a “European inspired” village that is home to “Peaches, our fountain nymph” and permits stores to open with corrupted names such as “Country Pastthymes.”

When the festival day finally arrived on September 12…well…it rained! A blessing from Mother Earth or the wrath of an angry God? A few church groups showed up; most interaction was respectful and polite, although there were some cases of overly-aggressive pamphleteering. Perhaps everyone learned that they have much in common after all: a deep sense of spirituality, a wish to make the world a better place, and a compulsive desire to buy lots of stuff that no one really needs. For whether you collect cheap figurines of fairies or angels, we’re all part of the consumerist heaven-on-earth called The United States of America. [Post by Anne D. Bernstein]

3 Responses to “Pennsylvania: Pagan As You Go”