« Punks Disrespect Monster Seahawk Statue | Main | Mago: Coming To A Town Near You? » 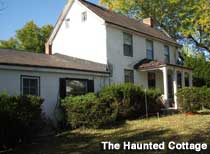 Professional ghost hunter Vince Wilson has moved into a haunted house in Harper’s Ferry, WV and opened it as an attraction.

It’s been known as “The Booth House” for generations, after its most famous resident, John Wilkes Booth, who supposedly spent a couple of nights in it. And it’s definitely haunted, according to Vince. “Green glowing lights, shadowy figures, luminescent beings in the back yard, the electricity acting weird,” Vince said, ticking off an evidently familiar list. Recently, according to Vince, his TV remote disappeared while he was watching a movie, and it was found the next day (by a team of visiting ghost hunters) in the far upstairs bedroom, on the floor, with the batteries taken out of it.

You may not see a ghost when you visit, but you will see the good-natured Vince, who personally conducts walk-through tours of the house and its museum. “I live here, so people can stop by any time within reason,” he told us. The small museum displays ghost-hunting equipment, esoteric books, and exhibits on paranormal superstars such as Houdini and The Fox Sisters.

Vince also opens the house to people who want to look for ghosts, or who just want to improve their ghost-hunting skills. He wants his attraction to inspire and instruct a new, less self-centered generation of paranormal researchers. “People are getting into it for fame and glory, to get their own TV show,” he lamented. “It should be fun.”

We asked Vince if there were any parts of the house that spooked even him. He said no, but that his research team had recently discovered mysterious walled-up spaces in the house that merit further investigation. “We ran a thermal imager over the walls, but all we saw was studs,” he said. “But what’s behind the studs? That’s the question.”

Update: In July 2014, Vince wrote to us: “It is with a heavy heart that I reveal that I am closing the doors on the Haunted Cottage this weekend.”

Directions:
Haunted Cottage. From the river bridge on the southeast side of Harpers Ferry, drive west 1 mile on US 340. Turn left (south) onto Washington/Shenandoah St., then quickly turn right onto Campground Rd. Just before the KOA campground, turn right onto Old Taylor Lane. Booth House is on the left.
Hours:
July 2014: Reported closed by owner.
Status:
Closed