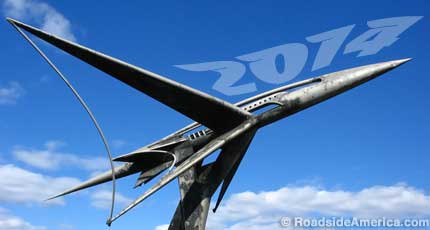 Aside from the 50th anniversary of the New York World’s Fair and the enshrinement of the Flying Paper Boy of the Guadalupes, what do we have to look forward to in 2014?

There’s quite a bit. For example: an 11-story-tall statue of winged Pegasus killing a dragon (to be built in Miami) and a perfect replica of Philadelphia’s Independence Hall — populated by robots (To open in South Dakota, which already has a great robot attraction).

Promises, promises. They’re cheap, and a quick review from last year at this time reveals that of twelve promised attractions for 2013, five did not arrive. Those five now insist that their debut will happen in 2014 — which sounds suspiciously like the billboard that promises “only two more miles” to a cave, but in fact only marks the distance to the next turn, where you find another billboard.

Still, opening a Roadside-worthy wonder is never easy, and we hope that attractions such as Slotzilla — a giant slot machine that spits out people on a zip line — have only been delayed to make them even more wonderful. 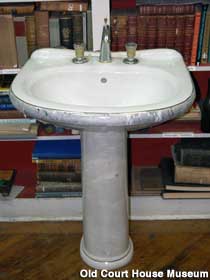 As for 2014, we’re eagerly awaiting the debut of the Waste Pro Garbage Truck Museum (Florida); the Morbid Anatomy Museum (New York); a life-size statue of Jumbo the Elephant (Massachusetts); and the Space Shuttle “Independence,” a walk-thru attraction bolted to the top of a 747 (Texas).

Fans of war booty will appreciate the Sink of Saddam Hussein, which is already in the Old Court House Museum (Mississippi), although its directors haven’t yet decided if they want to display the sink or simply use it in the ladies’ washroom. We’ve let the curator know what we think about that.

Several attractions currently in stasis are scheduled to kick out of their cocoons in 2014, such as the Wichita Troll, the Rocky and Bullwinkle statue, the World’s Tallest Grandfather Clock, and the World’s Largest Lincoln — which, at 72 feet tall, is difficult to keep under wraps. The Liberace Museum has been promised a return engagement in a somewhat reduced space, and work is already underway to reopen Holy Land USA as an attraction, possibly as early as this summer. 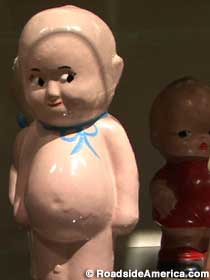 Will 2014 be the year that the Palace of Depression finally gets finished? Will the World’s Largest Thermometer get switched back on? Will the Recycled Roadrunner (currently in its builder’s back yard) find a new public home?

There are rumblings that all of these may happen — and of course many attractions-in-waiting simply fly under the radar.

Places like Tank Town USA didn’t even exist this time last year, and we expect that many similar unforeseen Roadside marvels lie ready to surprise us in 2014.

One Response to “2014: Giant Pegasus And Revolutionary Robots”