Some travelers seek out atmosphere by visiting Paris or Rome. We’ve always enjoyed the pungent terror ambiance that can be found in old, moss-grown American prisons. Perhaps the oldest and mossiest, Eastern State Penitentiary in Philadelphia, Pennsylvania, is giving its visitors a fresh whiff of behind-bars bouquet by inviting them to twist open its creaky locks and crawl through its underground hell-cells. 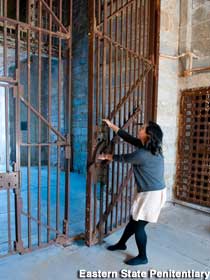 Dubbed “Hands-On History,” the new activities include almost a dozen tasks that tourists can perform at various spots within the abandoned penitentiary (under the watchful eyes of guides). Some are more correctional than others; our favorites would include opening the tall iron gate at the prison entrance (“The lock is more complex than it seems,” said Ellen Feist, the prison’s PR director) and climbing down into “The Klondike,” which is what the inmates called the prison’s unheated, windowless, subterranean punishment cells.

Seems like a great way to get some atmosphere, even if it’s the kind you want to scrub off as soon as you get to the nearest bathtub.