Pinball on the Rebound

The recent opening of the new National Pinball Museum in Washington, DC marked the fruition of America’s latest and most elaborate tribute to the classic coin-operated arcade attraction. What was once a ubiquitous leisure time activity is now devoutly enshrined in a historical context at places such as the Pacific (aka Lucky JuJu) Pinball Museum in Alameda, California, and the Silver Ball Museum in Asbury Park, New Jersey. But what’s exciting about the National Pinball Museum is that it aims to be a true museum—rather than a glorified arcade with informational plaques.

Although a central attraction is the “Pay to Play” room, the history and development of the game is fully explored; the exhibit even includes a series of rooms that re-create and trace pinball’s origins back to its roots in the French game of bagatelle, invented in 1777. There is also a theater, a gift shop which sells pinball parts, and plans to develop trade skills workshops where aspiring Pinball Wizards can study pinball repair and theory (both electro-mechanical and computer-based).

The museum’s Executive Director is David Silverman, a landscaper and former art professor who founded the museum back in 1998. For years. his collection of vintage machines was housed in a  small warehouse in his own backyard in Silver Springs, Maryland. But his intention was always to bring the mesmerizing machines to the masses. 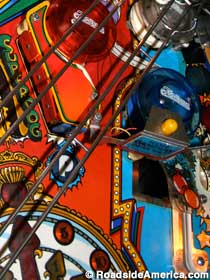 It’s now installed in a former F.A.O. Schwarz store in the “Shops at Georgetown Park” mall (3222 M Street NW). Visitors enter the premises flanked by two nine-foot-tall flippers. Admission is $13.50, plus a 50 cents per game fee if you want to flip for yourself (and who doesn’t?) in the “Pay to Play” room, which features a rotating selection of about 40 machines from Silverman’s extensive collection of over 800 examples.

So even though Silverman’s silver ball shrine is outnumbered by the 152 machines lined up at the Pinball Hall of Fame in Las Vegas, Nevada, his devotion to documenting the history of pinball while looking towards the future of the flippin’ form makes his endeavor essential and a reassuring sign that the game is certainly not over.

Sections: Attraction News Comments Off on Pinball on the Rebound

Directions:
Was in Washington, DC, then moved to Baltimore.
Hours:
April 2014: Sold everything
Status:
Closed