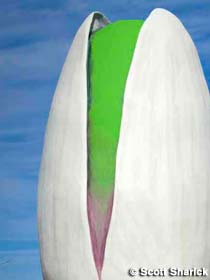 Just when you think you’ve finally gotten a handle on the World’s Largest attractions, something new pops up.

Actually, the World’s Largest Pistachio Nut outside of Alamogordo, New Mexico, was built late last year (we were mesmerized by its groovy colors) but it was only this past weekend that it was officially dedicated and blessed by a priest from nearby La Luz. A plaque at its base dedicates the nut to the late owner of McGinn’s Pistachio Tree Ranch, who, according to the Alamogordo Daily News, was a big fan of roadside attractions.

(Mr. McGinn may have been inspired by America’s many other giant garden edibles, but it’s not easy to build a giant nut — just ask the frustrated folks in Seguin, Texas, and their recently abandoned attempt to build the world’s largest pecan.)

The 30-foot-tall pistachio is perched end-up on a short pole anchored in nine feet of concrete, which prevents anyone from reclining on or riding the nut. However, nut hugging is still possible, and visitors will no doubt get creative with their pistachio shapshots as they have with other oversized attractions.

7320 US-54, Alamogordo, NM
Directions:
McGinn's PistachioLand. North of the city, on the west side of US-54, four miles north of its stoplight intersection with US-82.
Hours:
Lit at night. Store daily 9-5 (Call to verify) Local health policies may affect hours and access.
Phone:
575-437-0602
RA Rates:
Worth a Detour