In small town America, there’s a ceaseless struggle underway for recognition. Sac City, Iowa, makes its mark as home of the World’s Largest Popcorn Ball, a title the town lost for a time, but has snatched back with a new, super-sticky corn boulder. 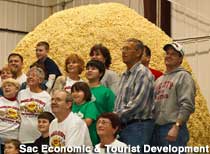 It began in 1995, when Sac City built a ball weighing 2,225 lbs. This was bested by a 2,377-pounder rolled by the Iowa Boy Scouts. Sac City then blew up its first ball with seven sticks of dynamite at the Iowa State Fair and built a new one weighing 3,100 lbs, which is still on display in a miniature barn on Main Street in Sac City. Then a store in Lake Forest, Illinois — Illinois — topped every previous record with a 3,423-pounder.  It was a real blow to Iowa pride.

“We’re gonna build one big enough that nobody will best us,” promised Shirley Phillips of the county tourism board when we visited the Sac City ball last year.

The new champion, hand-rolled on February 28 and “still steaming,” according to Shirley, weighs a whopping 5,060 lbs. It’s 7.5 feet tall, and 29 feet around.

Years of ball-building expertise went into its construction. The ball is built hot, using syrup and melted sugar as glue. “We actually beat the air out of it with our fists as we made it,” said Shirley (Sac City has learned that a loose popcorn ball becomes a crumbly popcorn ball). The wintertime construction date was also chosen from past experience, to allow the ball to “cool out” completely. The previous ball, built in the summer of 2004, stayed too hot for too long and eventually had to be fitted with a shrink-wrap girdle to keep it from sagging out of shape.

Shirley said that the town may need to tear out the back wall of the display barn to get this new giant ball into it. The current 3,100-lb ball will be taken out and, if it doesn’t collapse, will go on tour around the state. There’s no firm date yet for the switch, but visitors should expect to see the new ball enshrined before too far into the Spring.

“We want to find some way to coat it and seal it,” said Shirley, who is confident that this is a ball for the ages. “We tried clear deck sealer and it didn’t eat up the popcorn, so we might go with that.”

1325 W. Main St., Sac City, IA
Directions:
On the west side of town, in a small display building on the south side of US Hwy 20/Main St. between 13th and 14th Sts.
Admission:
Free
RA Rates:
Worth a Detour

One Response to “Popcorn Ball Supremacy”