For the past year-and-a-half, Stephen Guman of Naugatuck, Connecticut, has been building a castle out of 396,000 popsicle sticks. His goal, according to the Waterbury Republican-American, was to wrest the Guinness World Record away from the current wooden champion, made of 370,000 popsicle sticks. 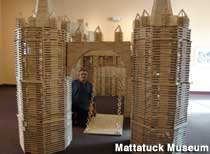 While Stephen awaits the Guinness decision, his castle will be on display at the Mattatuck Museum Arts & History Center in Waterbury, Connecticut. It’s 12 feet wide, 16 feet deep, and nine feet tall. We were told by the museum’s marketing director, Catherine Rosich, that no one will be allowed to cross the castle drawbridge to see what’s inside, since the drawbridge is also made of popsicle sticks, as are its supporting chains.

P.T. Barnum once lived in Connecticut, and maybe Guman’s castle and the World’s Largest Jack-in-the-Box are signs that the state is awakening from a long, boring sleep into a new era of showmanship.

Catherine said that the castle will be on display at the museum until at least late January, or until Guinness figures out if it really is the world’s largest.