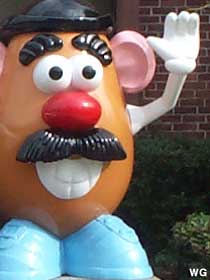 A newly-restored, proudly patriotic potato will serve as “official mascot” of the Fourth of July Parade in Bristol, Rhode Island. Uncle Sam Potato Head is just one of dozens of super-sized spud statues that were produced back in 2000 when Mr. Potato Head was named “family travel ambassador” of the state. Artists were invited to creatively interpret the classic toy and came up with a wide array of 6-foot-tall fiberglass fellas, including “Edgar Allen Poe-tato,” and the bizarre, bug-eyed, column-mouthed “Rotunda Head”. (Check out this page for a comprehensive photographic look at the line-up.)

The tourist-baiting tater celebrators were placed throughout Rhode Island at prominent locations, including government buildings, a zoo, a golf course, a hotel, numerous malls, and even near a church (the devoutly dumpy “Friar Potato”).

Over the years, some potato people fared better than others. Uncle Sam Potato Head sat neglected and ignored behind the Department of Public Works, rotting like a too wet tuber. Finally, the goodwill of Alan Hassenfeld (former chairman of Hasbro) led to a $3,000 donation that covered the cost of repair, including the creation of a customer-made trailer perfect for personal appearances. He’s back, he’s bearded…and better than ever!

Some of his pals didn’t make out so well. Almost immediately upon unveiling, the “Tourist Tater” was deemed racist and promptly removed from its location outside Warwick’s City Hall. An example generously donated to Pawtucket’s “twin town” of Belper in the U.K. was dissed; called “a monstrosity” and “hideous”, then passed off to a local McDonald’s. Some were sold off on Ebay, many vandalized, others stolen.

But you can still visit a number of spud survivors. The original statue that inspired all the fuss is at Hasbro Headquarters in Pawtucket. Caserta Pizza in Providence has one, although he’s lost his arms and nose along the way. Others have been spotted at Roger Williams Park in Providence, Thrifty Car Rental in Warwick, Dunkin’ Donuts in Warren, and even a state escapee currently residing at the Eastern State Exposition in West Springfield, MA.

Chepachet has ingeniously re-purposed their Mr. Potato Head (requiring a sex change), and the statue is now called “Betty The Learned Elephant” in honor of famous performing elephant L’il Bett, who was tragically killed by musket fire back in 1826.

The statues continue to wander and pop up in unexpected places, so keep your potato eyes open and be sure to tip us off if you come across one of these roving roots!

Sections: Events, Statues Comments Off on Potato Head of State