Where Are President Garfield’s Rocks?

Poor President Garfield. He was in office only six months in 1881 when he was cut down by an assassin’s bullet. And then his monument got torn apart and turned into a fireplace. 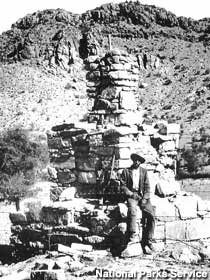 It’s not the big Garfield monument in Cleveland, Ohio. That’s still there. The monument-turned-fireplace monument was built in a hot, dry canyon southeast of Willcox, Arizona, by a troop of “Buffalo Soldiers” (African-Americans). Their job was to keep Apaches away from a water hole. They had a lot of time on their hands, and a lot of rocks, and they stacked the rocks into a 15-foot-tall monument (People in Arizona often do interesting things with rocks.)

“It was a flag holder, essentially,” said Kate Neilsen, a park ranger at Chiricahua National Monument. “Garfield got the big stone (engraved with his name).  It gave them an excuse to dedicate it to someone.”

That was in 1886. By 1923 the local ranchers were slowly disassembling the monument for doorstops. The family that lived next door tried to save it. “They contacted the Army, and they even contacted the Garfield family to try and help them restore it in its original spot,” said Kate. “No one was interested.” 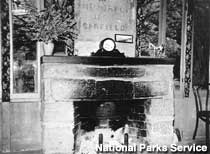 So, the family took what was left — including the big Garfield rock — and turned it into their dining room fireplace.

That dining room became part of the Faraway ranch house, and that ranch house is now part of the Chiricahua National Monument. Tours are given twice a day, and Kate is spearheading an effort to find the 30 or so stones that were hauled away before the monument was repurposed. “Just take a picture of it; you don’t even have to tell me who you are,” she said. “We just want to see what’s out there.  We don’t want it.”

Kate said that the idea of building an exact replica of the monument would be “great,” but that the National Parks Service doesn’t want the job.  Maybe somebody else does? Visitors to the fireplace can easily see where the monument used to stand; it’s about 400 yards from the house, according to Kate, “behind the bathrooms at the Faraway Ranch parking lot.”

Sections: Places Comments Off on Where Are President Garfield’s Rocks?