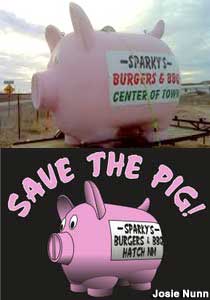 Teako Nunn has a thing for big Roadside statues. He erected a Muffler Man at his RV dealership and an Uncle Sam at his BBQ restaurant — and other oversized eye-catchers as well.

Most people in Hatch, New Mexico, love the statues as much as Teako. But not everyone.

“It started innocently and under control,” Teako said of his statue collection. “I was a pretty happy guy. I am a happy guy. And then I saw this pig. Wow! A big pig! I always wanted a big pink pig!”

Teako bought the pig, parked it by the highway, and draped it with a sign directing people to his BBQ in town. According to Teako, one man “who hates any kind of sign” called the pig to the attention of one of the town’s trustees, who was upset that a pig would be the first thing that visitors to Hatch would see. “That’s not what Hatch stands for,” the trustee was quoted in the Las Cruces Sun-News. “Enough is enough.” Teako’s request for a variance for his pig was rejected.

But that was not the end of the pig. The request was bumped back to a zoning committee — which approved it overwhelmingly. It will now go back to the trustees on February 9, and Teako, buoyed by his bureaucratic blessing, is hopeful that it will pass. His wife, Josie, has designed a Save The Pig! t-shirt, which the Nunn’s hope will be worn by supporters at the public forum that will precede the vote. The t-shirts have already sold out their first run. “I’m an eccentric, not a schmoozer,” Teako said. “I love to cook, and serve people food, and collect weird statues. And Josie and I are shocked — we really had no idea — by the support of people in town.”

That support extends even as far as Teako’s trustee adversary, who stopped at the BBQ for lunch the other day. “I mustered up my courage,” Teako said, “and I walked over and said, ‘Thank you so much for coming.’ And she said, ‘None of this is personal, and that’s why I’m here, just to let you know.'”

One Response to “Prodigious Porker In Peril, Potentially”