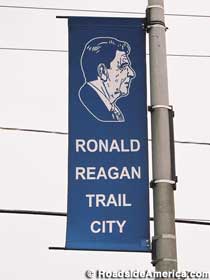 “You wouldn’t want to be putting a statue up in this weather,” said Joan Johnson, president of the Tampico Area Historical Society. Tampico, a “Ronald Reagan Trail City,” counts among its local museum treasures a welcome mat the President wiped his shoes on during a visit.

Joan said that Tampico still plans to erect a statue of Reagan as a young boy and place it in the park where he played as a child. But funding came up short, and although the town is disappointed by the delay, it hopes to have kid Ron ready by the summer. 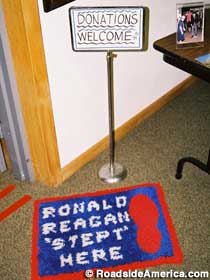 A shortage of funds has also stalled more ambitious plans in Dixon, which wanted to rebuild part of the Rock River beach where teenage Reagan served as a lifeguard.

The sandy patch, whenever it’s completed, will have a statue of lifeguard Reagan as well as a reproduction of his lifeguard stand, complete with its “Profane Language Prohibited” sign and the notches cut by the aquatic sentinel for the 77 people whose lives he claimed to have saved. Anne Lewis, chair of the Dixon Reagan Centennial Committee, couldn’t verify Reagan’s personal tally, but said that the river does have a strong undertow.

With Illinois caught treading water on its statue dreams for now, where can Reagan fans go to get a centennial view of Teflon Ron? We recommend the Ronald Reagan Presidential Museum in Simi Valley, California, which has just completed a $15 million makeover. One of its new featured exhibits allows visitors to exit the “Washington Hilton” just as Reagan did when he was shot by John Hinkley Jr. Once out the door, you’re confronted with video footage of the chaotic moment, and can then view President Reagan’s actual business suit of near-death, complete with bullet hole and blood stains, and an X-ray of his chest showing the bullet a half-inch from his heart.

More on Birthplace of Ronald Reagan