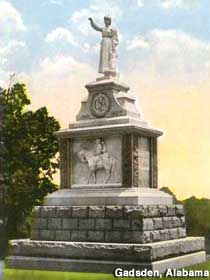 Shameful. That’s the only word to describe the vandalism that once again deprived the statue of Emma Sansom in Gadsden, Alabama, of her right index finger.

Emma, “the sunbonnet heroine,” was a noble maiden of the Confederacy. Her dainty 15-year-old finger turned the tide for the Rebels — briefly — when it pointed southern troops to the only safe spot to cross Black Creek. Brig. Gen. Nathan Bedford Forrest followed that finger and whupped the Yankees who had dared to invade northeastern Alabama.

It took a lot longer to dispatch the carpetbaggers who came here after the war, but by 1907 the South was the South again and Emma was immortalized in marble to inspire future generations. But in recent years something has gone terribly wrong. Emma’s fateful finger has been snapped off five times according to an article in the Gadsden Times. This cannot be easy, since the finger is 20 feet off of the ground and the statue stands in the middle of one of the busiest streets in town.

Gadsden has replaced Emma’s finger, and has trained a video camera on the statue to snare any future vandals. But are Emma’s amputators merely motivated by her tempting digit, or do they have a deeper lack of respect for the Lost Cause?

Perhaps it’s time for Gadsden build a new Emma statue, one that emphasizes the only part of her that really matters. Something like this. The scalawags would be cowed, and Gadsden would never have to worry about severed fingers again.