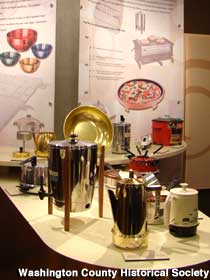 We admit that our interest in kitchenware is usually on a back burner, unless there are miracles involved. But that attitude will have to change with the recent opening of the West Bend/Regal Ware Historic Museum in West Bend, Wisconsin.

Lisa Rogers, director of marketing for the Washington County Historical Society, told us that the museum showcases West Bend’s other products as well, such as outboard motors, exercise equipment, home alarm systems, and chain saws. “The chain saws are huge,” she said. “I don’t know how people used them without cutting off their legs, because there’s no safety anything on them.” 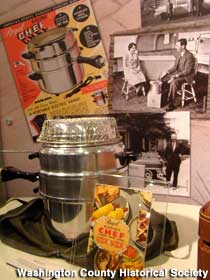 Lisa also confirmed that the Smithsonian Institution has been after this unique collection for years, but that the companies and the historical society had worked hard to keep it in West Bend, where it would be better appreciated.

The new attraction occupies nearly all of an old credit union building, which makes it the only museum in America with an operating drive-in bank window on the side.

Pat Seitz, director of communications for Regal Ware, said that over 4,500 items are in the companies’ archives, and that, “If you come a year from now you’ll see different things.” Lisa told us that Phase 2 of the museum will be a functioning 1950s test kitchen, which will host cooking demonstrations and private parties — and where, we hope, visitors will be allowed to try out that electric pizza slicer.