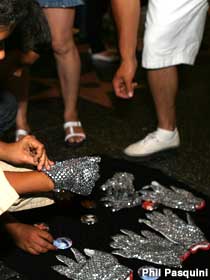 No Jackson Behemoth for Vegas: Michael Jackson died too soon — to give Las Vegas a really great tourist attraction. “I have this huge statue of me in full regalia, moon boots,'” Jackson reportedly told concert promoter Jack Wishna, who was interviewed by E! Online. According to Wishna, Jackson wanted to live in a Las Vegas hotel, and on the nights that he planned to perform “the statue comes out to the center of The Strip so the world knows that I’m here. It would come out on a conveyor belt.”

The Bucket Was On My Bucket List: Fred Trujilio, the retiring boss of Cannonsburgh Pioneer Village in Murfreesboro, Tennessee, home of the World’s Largest Handmade Cedar Bucket, was heartbroken when the bucket was reportedly burned by arsonists in 2005, according to a story in the Murfreesboro Post. “That bucket never did anything to anybody,” Fred observed. He called it “the Michael Jackson of Murfreesboro” and that he “never realized what the bucket meant until it was gone.” On a happy note, the Post reports that the bucket is being rebuilt by local blacksmiths, and that the new one will be in place “before long.”

Cider Barrel Rules: Another large wooden liquid holder is The Cider Barrel, an old roadside stand shaped like a cider barrel, which has been closed for years in Germantown, Maryland. The town wants to save it, according to the Washington Examiner, but can’t agree how. Some want to move it and reopen it; some want to keep it where it is — which means that it will remain closed, since its parking lot has been turned into luxury apartments. The keep-it-where-it-is group says that the Barrel is important to the history of Route 355 — but couldn’t it just be moved somewhere else on Route 355? And no offense to Route 355, but it’s no Route 66.

Magical Monoliths Rise Again in Texas: After a dozen years in storage, the Caelum Moor monuments of Arlington, Texas — 22 pink granite stones — are being set back into the ground. This pseudo-Stonehenge caused such a fuss when it was first erected in the 1990s, according to the Fort Worth Star-Telegram, that it was eventually packed away — which is not easy with something weighing 540 tons. “Some religious leaders … opposed the plans, saying the artwork has pagan ties,” the newspaper reported. “In 1996, several witches said that Caelum Moor had been a site for rituals and probably would be again if the stones were moved to public property.” Caelum Moor is being erected near the new Dallas Cowboys stadium, so perhaps thousands of football-worshipping fans will dampen any stray pagan vibes.