• Big Leather Boot: The Red Wing Shoe Company of Red Wing, Minnesota, is reportedly planning to open a museum this coming June — and its featured attraction will be the world’s largest boot, 16 feet high and 20 feet long, made of real leather. “A person wearing the boot,” the company claims, “would stand … 12 stories tall.” It will definitely be an upgrade over Red Wing’s current big boot. 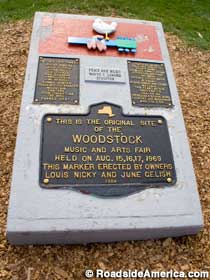 • Woodstock Monument Guy Dies: Wayne “Woodstock” Saward, who in 1984 designed and sculpted the 5.5-ton Woodstock monument in Bethel, New York, has died at age 52. “He wanted to go to the Woodstock concert,” reports the Times Herald-Record, “but his older brother wouldn’t take him.” The paper also notes that Saward camped at the concert site every August for nearly 30 years.

• Museum of Clean: The long-promised Museum Of Clean in Pocatello, Idaho, has had its opening delayed yet again. According to the Idaho Statesman, charismatic owner Don Aslett has vowed that his museum — 70,000-square-feet packed with 6,000 historical cleaning devices — “will likely open later this year,” and that “everything’s going to be touch and feel, no walk and gawk,” which perhaps explains the delay. Aslett also said that the museum’s 10-foot clock tower will signal the hour not with the sound of chimes, but with toilet flushes.

• Elvis Presley Haircut Celebration: The 50th anniversary of Elvis Presley’s military induction haircut has been celebrated in Fort Chaffee, Arkansas, at its new Barbershop Museum, which preserves the spot where the celebrity shearing took place. “I just can’t believe how popular this has been,” said one attendee of the museum. “We have a true bonafide tourist destination.” According to the Fort Smith City Wire, the celebration included complementary G.I. haircuts given by the son of the man who cut Elvis’s hair.