Roy Rogers: Happy Sales to You 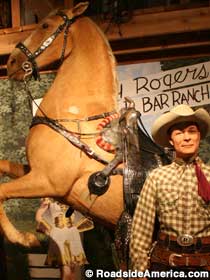 When the Roy Rogers and Dale Evans Museum (last located in Branson, Missouri) closed in December of 2009, fans of the cowcouple were concerned…where would the museum’s extensive collection of Western Memorabilia end up? In particular, what would become of the institution’s most iconic (and, frankly, somewhat disturbing) prized possession: the taxidermied hide of Roy’s horse, Trigger?

Trigger is one of the most famous performing horses in history. Back when he was alive and lively, he had about 100 tricks in his repertoire, including shooting a gun and doing the hula. He had his own fan club and his hoof prints (along with Roy’s hand and boot prints) can be found in the hardened cement in front of Grauman’s Chinese Theatre. 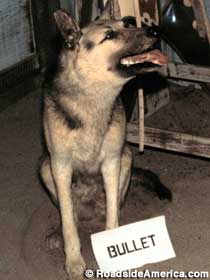 Will Trigger disappear from view into a private collection or will his rearing presence once again be displayed in a museum, accessible to the public? We naturally hope for the latter. But until then, you can visit America’s other stuffed and mounted equine exhibits:

Union General Phil Sheridan’s war horse Rienzi proudly resides in a glass case at the Hall of Armed Forces History at the Smithsonian. If you’d prefer to see a horse from the opposing side, head over the The Virginia Military Institute Museum in Lexington, where “Stonewall” Jackson’s favorite mount, Little Sorrel, can be found.

Comanche, tough survivor of The Battle of Little Big Horn, ended up at the University of Kansas Natural History Museum in Lawrence — his ownership the result of an unpaid taxidermy bill made out to the officers of nearby Fort Riley.

“The World’s Largest Stuffed Horse” is General, who stands in a rather sorry-looking stable at The West Virginia State Farm Museum in Point Pleasant. He’s big.

And then there’s the peaceful pony “Misty of Chincoteague”, featured in a series of charming books aimed at the foal fantasies of young girls. Misty and her offspring Stormy are on display at the Beebe Ranch. The large white patch on Misty’s side is said to resemble the United States, although, depending upon the bent of your imagination, it can look like anything from a pork chop to a dancing hippo. Like Trigger, Misty’s hoof prints are preserved in cement…over at the adorable and deco Roxy Movie Theatre in downtown Chinoteague. [Post by Anne D. Bernstein]

One Response to “Roy Rogers: Happy Sales to You”