James Henager has some P.T. Barnum in him; he knows how to use the press, and the press usually finds itself cheerfully playing along.

Henager runs Henager’s Memories and Nostalgia Museum in Buckskin, Indiana. When we first learned about his museum, he quickly embraced our christening of it as the loneliest in America — for a time he even used it in his promotional material — though it’s since become far too busy to merit that distinction (others are more deserving). 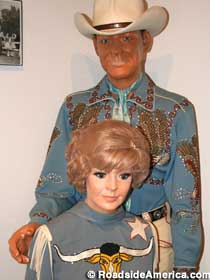 Then, earlier this year, Henager was in the news when he claimed to have found a secret — some would say dubious — link between Abe Lincoln and Billy the Kid.

Now Henager is back, this time tying his museum to news of the recent shuttering of the Roy Rogers – Dale Evans Museum in Branson, Missouri, and the assumption that all of its stuff will be dispersed through various auctions in 2010.

Henager, a big fan of Roy Rogers, told the Evansville Courier & Press that he’s launched a grassroots “Save a Child’s Hero” campaign. The plan — virally spread — is to get as many people as possible to buy Roy Rogers items when they come up for sale and then give them to Henager’s Memories and Nostalgia Museum. This will “help keep Roy and Dale’s history alive,” Henager told the Courier & Press.

Could such a plan actually work? The Rogers’ family hasn’t yet revealed its plans for Roy’s stuff, but the idea that it all might end up in Buckskin, Indiana, probably hasn’t yet occurred to them.

Puppets that we are, we will keep you posted.

Sections: Attraction News Comments Off on Roy Rogers and James Henager: Perfect Together