« Get Your New Kicks On Route 66 | Main | Bigfoot, Aliens, Bug Food Thrive In The Peculiarium »

Looking For Screamers On The Jersey Shore

“I loved that exploding toilet,” said Jack Morey, head of development and research at Morey’s Piers in Wildwood, New Jersey. “But it’s gone.” 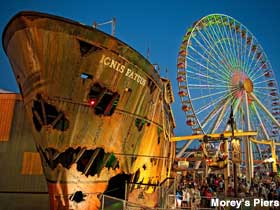 The toilet was one of the shock effects on Ghost Ship, a multi-million-dollar spookhouse that opened on Morey’s Pier in 2010. After a season’s worth of experience, Morey’s has reviewed its star attraction and removed the parts that it felt weren’t scary enough. No favors were shown; the toilet didn’t make it.

Jack, however, enthusiastically confirmed that the vomiting skeleton is still there.

Billed as “the creepiest attraction on the eastern seaboard,” Ghost Ship is loosely based on the story of The Philadelphia Experiment, which in 1943 reportedly teleported a U.S. Navy ship through space and time and left its crew either raving mad or horribly dead. Visitors to Ghost Ship have to wind their way through its multiple decks — it takes a quarter-hour — while live actors and animatronic props try to scare the bejesus out of them.

When Ghost Ship opened, its cast was taught to speak only in German. That turned out to be too confusing; now they speak only English, or just shriek and howl (a universal language). Barriers have been removed to make the actors more menacing, and the pacing of the attraction has been adjusted to keep from burning out the cast. “It’s a big facility,” said Jack (the ship is 14,000 square feet). “You can do anything for an hour, but try scaring people for eight hours. It’s exhausting.”

Jack said that legendary former Wildwood attractions such as Castle Dracula inspired Morey’s to build Ghost Ship as an attraction that would draw people for decades, even if it wasn’t on a boardwalk at the beach. Morey’s is duty bound to make Ghost Ship scarier year after year. “You look for the screamer,” Jack said, explaining that cast members are trained to zone in on those who seem likely to produce the loudest reactions. “Screams are good for business. If a guy is going through with his girlfriend, he wants her to scream.”

Sections: Attraction News Comments Off on Looking For Screamers On The Jersey Shore

3501 Boardwalk, Wildwood, NJ
Directions:
Garden State Pkwy exit 4. Drive east on Hwy 47 into Wildwood. Turn left onto New jersey Ave. Drive north 13 blocks, then turn right onto Schellenger Ave. and drive to the beach. Ghost Ship is at the end of Schellenger Ave., on Mariner's Landing Pier on the boardwalk.
Hours:
Summer daily starting at 4pm on weekdays and 2 pm on weekends. Weekends only May and Sep. (Call to verify) Local health policies may affect hours and access.
Phone:
609-522-3900
RA Rates:
Worth a Detour