Scripture Perfect: Not So Easy in Wax

“I don’t like things that distract,” said Mark Pedro. 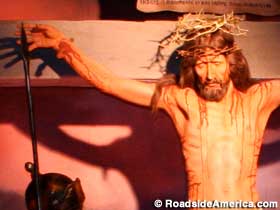 Mark is the art director at Christ in the Smokies Museum and Gardens, a Christian wax museum in Gatlinburg, Tennessee. One of his personal goals is to create wax tableaus that contain nothing that interferes with the inspirational story of Jesus — distractions ranging from inappropriate costumes to overdramatic lighting. Mark studies his dioramas frequently, striving for perfection.

Unfortunately, the museum’s visitors can be tough to please. It turns out that the same tendency toward disagreement that produced dozens of different sects and denominations of Christianity, also divides opinions  over wax interpretations of it. And disagreements lead to distractions.

“A lot of Christians like to argue points with you,” said Mark. For example, each scene in the Christ in the Smokies Museum is accompanied by narration that’s verbatim Bible scripture, citing chapter and verse. This should preempt any distractions — but nitpicky visitors remain dissatisfied. They want to know why the verbatim isn’t taken from the Bible version used by them. 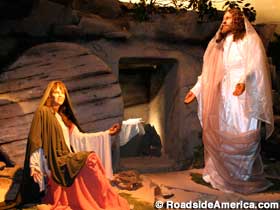 Visual pitfalls abound. The Last Supper narration explains that the scene is taken from Leonardo da Vinci’s classic painting, but some visitors want to know why Jesus and his disciples aren’t sitting on the floor, like in the movies. In the crucifixion tableau, Mark has had to defend the spikes through Jesus’s wrists to visitors who insist he was hung up by his hands. Even the gore is a matter for dispute. “I bloodied up Jesus a little bit more,” said Mark. “Ever since The Passion of the Christ people expect him to be more bloody.”

Mark is so committed to eliminating distractions that he asked us not to reveal several of them that he hadn’t yet corrected in the displays — which had completely escaped our attention until Mark pointed them out to us. That seemed obsessive, but we’re in no position to judge anyone for obsessive behavior. No one will roll the stone from our Tomb of Secrets.  Visitors will just have to see if they notice them, although that could also be a distraction.

Sections: Places Comments Off on Scripture Perfect: Not So Easy in Wax

Directions:
From US Hwy 441, take stoplight #5 (River Rd) and drive west a couple of blocks. On the right, at the corner of Maple Lane.
Hours:
Jan. 2021: Reported permanently closed.
Status:
Closed

More on Christ in the Smokies Museum and Gardens