Cypress Gardens, Florida’s first theme park, has once again found itself out in the weeds. 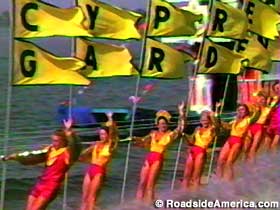 Evidently, efforts to find a new winning formula have been unsuccessful.

It always seemed to us as if Cypress Gardens failed by trying to be too much. The water skis and Southern Belles weren’t enough for its new breed of MBA managers. Their latest “we’re closed” press release spoke of their attempts at “numerous management frameworks,” rather than trying to create new routines for the water ski show. They wanted to slug it out with Disney and Universal Studios, which was admirable but insane.

As an article in the Lynchburg News and Advance points out, the Cypress Gardens property is “zoned for entertainment.” There’s a chance it will rise again from this latest belly-flop (maybe a desperate state park rescue, a la Weeki Wachee?). If so, we hope they get back to the basics. Bring in a water-skiing dog. Pit the Southern Belles against some dim-witted Yankees in a Civil War battle. Work with what you do best, Cypress Gardens. The people will come.

One Response to “See-Saw Cypress Gardens: Down Again”