It may never attain the stature of Graceland, but fans of The Allman Brothers Band now have a pilgrimage shrine tourist attraction of their own.

The Big House Museum in Macon, Georgia, has opened. It’s the house in which the band lived during its productive years, a combination commune/crash pad in a surprisingly suburban upscale neighborhood. 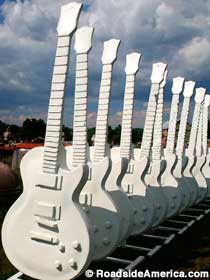 The Big House Museum is an attraction that definitely needed time to mellow before it arrived. Back in the early 1970s, the families living in the surrounding houses probably weren’t too happy about their rock and roll neighbors, a hard-partying southern band known as much for their ingestion of booze and drugs as for their music. Now, everyone loves the Allman Brothers — that is, everyone who remembers them. The band didn’t do much after 1973, the same year that they were evicted from the house.

Inside, the three-story Tudor mansion is packed with framed posters, articles of clothing, gold records, instruments, amps, tour cases. There’s a photo of Georgia governor Jimmy Carter wearing an Allman Brothers t-shirt, and an upstairs bathroom with a seven-head shower (see “commune” above). The holiest part of the house is Duane Allman’s Indian-accented bedroom, restored to the way it looked when he died in 1971. It raises an awkward point: despite all of the latter-day good vibes, the neighborhood really wasn’t kind to the band. Both Duane and bassist Berry Oakley died in motorcycle crashes on nearby streets. Their graves are also popular attractions in Macon.

Is this the start of a wave of 1970s Southern Rock attractions with senior admission discounts? Who’ll get a museum next? The Marshall Tucker Band? The Dixie Dregs?