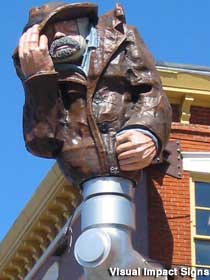 The Upstate New York village of East Aurora is well on its way to becoming an epicenter of eccentric signage. The small burg of 6,700 residents already hosts a number of oversized sculptures that do double duty as smile-inducing landmarks and advertisements for local businesses.

The current larger-than-life lineup includes a coffee cup, bicycle, paintbrush, toothbrush, and by far the area’s most prominent promotional eye candy: a 10-foot-tall three-dimensional portrait of 5&10 cent store proprietor Ed Vidler. “Vidler on the Roof” depicts the friendly, bespectacled merchant (of 80-plus years) perched above the store entrance, wearing a red apron, right hand raised in a friendly wave, with sneaker-clad legs dangling over the edge of the building. It’s a traffic-stopping town treasure.

The crafty guy responsible for all this mega-sized marketing is Eric Zimmermann, owner of Visual Impact Signs on Main Street (home of the giant paintbrush). Zimmermann’s business has been growing and growing, ever since he took on the task of fabricating “The Lake Effect Man” for Buffalo brewpub Pearl Street Grill. In 2008, this tribute to the area’s notoriously inclement weather was unveiled: a 24-foot-tall, 2 1/2 ton sculpture of a hat-and-raincoat-sporting man, emerging from a beer tap, using his arm to shield himself from the prevailing precipitation. 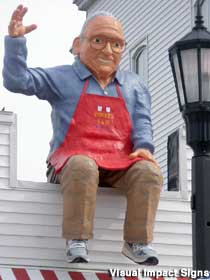 Although Zimmermann’s creations have plenty of fans, he’s also courted controversy. Some Buffalo preservationists found “The Lake Effect Man” inappropriate for a historic building (creating a brew-haha!) and a number of East Aurora trustees express concern that their charming community will be overrun with overgrown signage. Some even dare to call the look “tacky!”

Zimmermann says “we sell them because they are effective.” But he “sees the point of the village” and recognizes that “they have to be done tastefully.” We say: pay them no mind! After all, the recent publicity means that he’s now being contacted by out-of-state clients…and that’s good news. As we’re huge fans of huge signs, we hope that he’ll soon be rolling out his special brand of commercial sculpture in other regions. When Art meets Mart, the more the merrier!

Vidler on the Roof

More on Vidler on the Roof