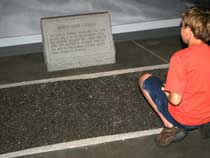 There’s no denying it; Americans have become slab-happy.

First came the “The Slabs” in Niland, California, an abandoned military base of empty concrete foundations and desert refuge for squatters and snowbirds out by Salvation Mountain.

Next came imported, chopped-up Berlin Wall sections in the early 1990s. Slabs from the Wall — magically imbued with Cold War strife and USA-planted seeds of freedom — soon became attractions all over America, even if the connection to the Wall was a little strained.

The newest manifestation of Slab Culture: museums displaying slabs from old roads. We first noticed it at Daytona USA, whose exhibits include a hunk of the highway on which the race used to be run.

Now a Spokane, Washington museum has preserved a hunk of old US 10 after it was torn up for repairs. US 10 isn’t celebrated like certain other roads — and it isn’t particularly historic. But it ran through Spokane, and this hunk had the date that it was poured engraved into it. “The numbers,” according to an article in the Spokesman-Review, “have been outlined in blue to make them easier to see.”

Rome had its Appian Way. Are we seeing an emerging “Slabbian Way” — crumbling chunks of infrastructure awaiting enshrinement in museums?

And do you want to devote another second to thinking about slabs?