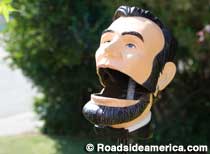 When it comes to Abe Lincoln, tourist attractions haven’t been shy in finding ways to cash in and merchandize. We’ve seen all manner of misshapen statuary of our 16th President, commemorative plates, paperweights, and trashy keepsakes. Unlike Elvis Presley, there is no surviving estate with a lawyer army to crush off-brand souvenirs. But Lincoln is a brand that just can’t be diluted or damaged…

We really like this souvenir Lincoln grabber head for a couple of reasons: 1) The plastic grabber-on-a-stick, once confined to gator and shark heads, has made the species and logic leap to human heads. 2) It was one of the less expensive items at Springfield, IL’s Abraham Lincoln Presidential Museum. 3) It’s garish, obnoxious, and probably the most “wrong” thing to take away after your museum-borne epiphanies about Lincoln’s life and meaning.

Yes, it’s really for kids (picture junior chomping daddy’s ear with it while he’s accelerating onto the interstate), but that’s never stopped us before.

And it’s more disturbing in quantities. 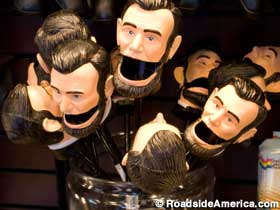