Sphinx And The Goop In Need Of Good Homes

The 18 month odyssey of Charlie Spillar is nearly over.

Charlie works for Valley of the Moon, a folk art attraction in Tucson, Arizona. In late 2007 he got a phone call: would he try to help save the sculptures from Magic Carpet Golf, a local landmark that was slated for demolition? 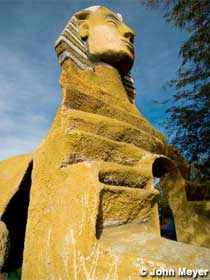 Charlie said yes, and he’s had a very busy year-and-a-half.

The giant Tiki head has already been moved to its new location, where  local artist Tom Prevet — who sculpted Tucson’s McDonald’s dinosaur — is performing reconstructive surgery ahead of the Tiki’s official dedication on August 29.

The big bull, re-named Tucson Toro, will arrive outside of its new home, a local steakhouse, next week.

Valley of the Moon has agreed to take four of the statues: the howling tree stump, the spider, the pygmy hut, and the castle. “They backed off The Goop,” said Charlie, referring to a fifth statue of a 3000-pound alien head. “But I’ve got some people already who are interested in it, so I’m sure I’ll be able to find a home for it.” 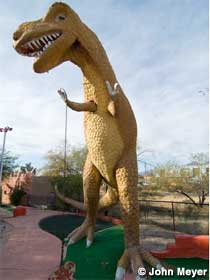 That leaves only the 30-foot-long, 20-foot-tall Sphinx, the largest sculpture and the most difficult to move. “There’s a lot of people interested,” said Charlie, “but it’ll take someone serious or maybe some Egyptian philanthropist that’s got a lot of property. You could pick it up with a giant helicopter, like they use to move tanks.”

Charlie asked that anyone interested in the Sphinx or The Goop e-mail him at cspillar@q.com, and said that the purchase price would be classified as tax-deductible donation to the Valley of the Moon.

“I’m dedicated to saving them,” he said, “but I’m also ready for the darned thing to be ended.”

Sections: Attraction News Comments Off on Sphinx And The Goop In Need Of Good Homes