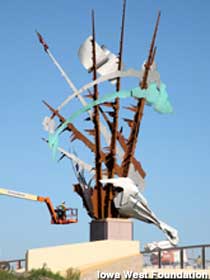 Have you ever driven from Omaha into Council Bluffs on I-80 — and been unaware that you’ve crossed from Nebraska into Iowa? That won’t happen again.

“Odyssey” has arrived, four giant multi-ton metal piles of cones and cylinders and jagged discs created by New York artist Albert Paley, who calls it “the gateway to Iowa.” It rises an impressive 100 feet above the freeway. It cost $3.5 million.

Odyssey has already been compared to the Eiffel Tower by the arts foundation that commissioned it, and to the Statue of Liberty by Paley himself. A local professor told an Omaha newspaper that Odyssey was much better than Nebraska’s I-80 archway. Council Bluffs drivers, however, have been less enthusiastic, calling the giant piles “Freddy Krueger hands” and making other unkind comparisons. 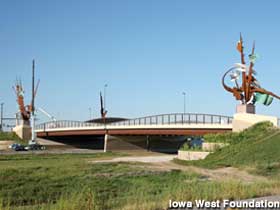 When we first saw the plans for this project, we dismissed it as just another big-thinking idea that would be stopped by small minds. But Odyssey is now reality, an eye-poking antler arch for the 21st Century. And we’re baffled by all the fuss in Council Bluffs, which is, after all, no stranger to giant spiky things.