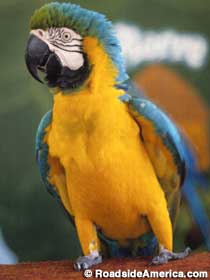 The town of Everman, Texas has a problem with parrots. The burg’s ever-growing colony of Quaker Parrots first appeared in the early ’90s. The feathery flocks are assumed to be descended from former pets. Local legend has it that an unidentified feuding couple released some birds during a quarrel (About what? Changing the newspaper at the bottom of the cage, perhaps?).

These days, huge parrot nests the “size of refrigerators” adorn poles throughout the town, wrapped around the comforting warmth of electrical transformers. Unfortunately, this results in occasional explosions and costly repairs. Not to mention the bother of constantly washing poop off of the municipality’s police cars.

The good news is that the parrots have become a magnet for bird watchers, and preside as the small town’s only tourist attraction. To offset the burden that these pesky-yet-popular mascots imposed on town finances, perhaps some enterprising exploitation is in order. It’s time to turn this two-bit tourist attraction into a money maker.

After all, other towns have used their own interactions with unusual wildlife to fuel fame and fortune. Olney, Illinois is officially “Home of the White Squirrels” (one of several claiming that distinction). Olney doesn’t simply host an abundant community of fluffy albino nut lovers; they sell souvenirs, including white chocolate squirrels, key chains, and hoodies.

And Hildago, another Texas town, turned their 1990 bout with killer bees (who crossed over the border from Mexico) into a positive celebration of these scary swarmers. Hildago has a $20,000 “World’s Largest Killer Bee” statue. Postcards are available, turning sting into bling.

Now if only someone could teach Everman’s wild parrots to ride bicycles, like the one at Sarasota Jungle Gardens and every other classic parrot show. But how about riding bikes on the telephone lines, between their transformer nests? Then you’d really have one amazing tourist attraction! [Post by Anne D. Bernstein]

One Response to “Squawk Show”