Pat Croce is a wealthy man who loves what he calls “The Golden Age of Piracy” — the time of cutlass-swinging buccaneers such as Captain Kidd and Blackbeard. 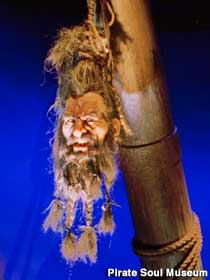 In 2005 he opened a multi-million-dollar Pirate Soul Museum in Key West, Florida, the largest pirate museum in the world. But at the end of July 2010 he plans to close it, pack up its treasure booty and high-tech exhibits, and move it north to St. Augustine, where he wants to personally reopen it in November with a “ribbon-slashing.”

“Key West is a wonderful location,” Pat told us, “and the museum is outrageous — I spent way too much money on it — but if you had a chance to do something a second time, wouldn’t you do it bigger? Better?”

Pat has made part of his fortune as a motivational speaker, and he’s a nonstop salvo of enthusiast broadsides for his project. “Hundreds of thousands of 4th graders come to St. Augustine every year,” he said, “and I want to make this museum such an experience that they go home raving about it — because I’m a 4th grader at heart!”

In December, Pat was giving a talk (on pirates) in St. Augustine when he mentioned to a local bureaucrat that he was thinking of moving his museum somewhere else, possibly to Philadelphia (Pat’s hometown). “Pat,” the bureaucrat said, “you should come to St. Augustine. We were attacked by pirates!'” That bureaucrat should be given a raise, because that’s just what Pat wanted to hear. “He showed me some buildings,” Pat recalled, “and damned if I didn’t fall in love with one of them, Tee Pee Town.” Pat bought the property and is now gutting it for the big move. “Massive renovations,” Pat said. “It’s gonna be beautiful. The city’s gonna be extremely proud.” 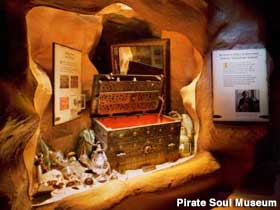 In addition to its pirate history, St. Augustine has an advantage of being only two hours from Orlando and its supply of Disney “Imagineers,” who will help to build and maintain the museum’s many high-tech exhibits. “I had seven interactives in Key West; in St. Augustine I’ll probably have about eighteen,” Pat said. He cited the robotic severed head of Blackbeard as an example. “It’s such a great animatronic, with so many facial movements. But to get these specialists down to Key West to fix it, when it wasn’t working great, was real trouble.”

Pat ticked off what St. Augustine can look forward to, such as a walk through a pirate ship (“You’re gonna feel like you’re in a battle.”) and a visit to Treasure Island, populated with robot cutthroats and genuine artifacts such as pirate chests and Jolly Roger flags and real pirate treasure. Pat even plans to expand his “pirate smell” exhibit.

“It will be a totally immersive, emotional experience,” Pat said — but first he has to get it all from Key West up to St. Augustine. “My wife said, ‘What are you, crazy? How are you gonna do that?’ I said, ‘I’ll get it done.'”