Standing On The Corner’s Rt. 66 Shrine

Disaster has led to opportunity in Winslow, Arizona.

The disaster was the destruction of the town’s J.C. Penney store next to its Standing On The Corner Park — a photo-op tribute to a lyric from a 1970s song by the Eagles. The opportunity is that the lot formerly occupied by the store, and the walls left standing from the fire, are now being transformed into the town’s new Route 66 Plaza. 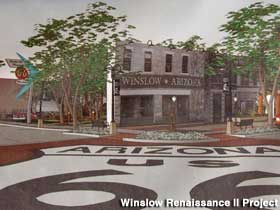 The leaders of Winslow are no dummies. Standing On The Corner, while still popular, has a limited supply of fans compared to Route 66’s legion of cruisers. And the planned Plaza is designed to cater to their love of nostalgia and gimmickry.

An archway will be tunneled through the Standing On The Corner mural, which stands behind the Standing On The Corner statue. This will lead into the park. On the opposite side of the wall from the mural will be painted a skyline of Chicago — the starting point of Route 66. From there a pathway will lead west across the lot, roughly mimicking the route of Route 66, to a wall on the other side, which will be painted like the end point of Route 66 in Santa Monica, California. The pathway will be made of real Route 66 concrete, salvaged from pieces of the Mother Road in Winslow that have been ripped up over the years.

The Plaza will also have a stage for concerts modeled after an old drive-in movie theater, and a gaudy “Googie”-style neon sign out by Second St. (Route 66). An enormous Route 66 logo will cover the pavement at the intersection of Kinsley Ave. and Second St., wrapping around the Standing On The Corner statue, big enough to be seen from space.

We hope that businesses in Winslow will pick up on the opportunities presented by the Route 66 Plaza. They can start selling little plastic 1950s cars and knee pads, so that Route 66 acolytes can retrace the Mother Road in miniature along the walkway — vroom vroom! — on their knees.

Sections: Attraction News Comments Off on Standing On The Corner’s Rt. 66 Shrine

Standin' on the Corner Park

More on Standin' on the Corner Park