Star Trek The Experience To Close 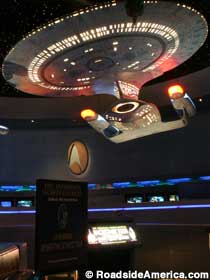 We’ll spare you the “beam me up” and “live long and prosper” clichés. Star Trek The Experience, one of the more engaging attractions in Las Vegas, is closing forever on September 1.

A Las Vegas casino-hotel is a risky place to put an attraction if you want it to stick around. Star Trek The Experience lasted for 11 years, which qualifies it for dinosaur status on The Strip. But an attraction that costs $70 million can only be profitable in a handful of places, and a popular annual Star Trek convention was held in the same hotel. All things considered, it was a good location, and the attraction had a healthy run.

An article in the Casino City Times quotes a representative of the company that owns all of the props at Star Trek The Experience. According to her, the company is “definitely investigating other Las Vegas possibilities” for the collection of over 200 items, which includes the McCoy medi-scanner, a pair of Klingon handcuffs, and a furry white Vulcan Acolyte robe — and the two giant Starship Enterprise replicas hanging from the ceiling. Maybe they’ll end up in a local museum. Or maybe, like the Elvis-A-Rama Experience, they’ll be warehoused until they resurface in their own casino.

But you shouldn’t wait. If you really want to see a 23rd century plasma rifle, or if you’ve ever wanted to get your picture taken on the bridge of the Enterprise or drink “Romulan Ale” in a Star Trek-themed bar, then you have to accelerate your butt to warp 9 and get here….

4 Responses to “Star Trek The Experience To Close”