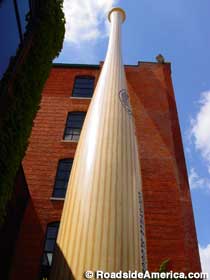 Let’s say that you own a business, and you want to erect an eye-catching roadside statue to pull in customers — but laws in your overly regulated community say that you can’t (sign ordinances, height restrictions, style restrictions, etc.).

What do you do? You call your statue something else.

One example is the World’s Largest Baseball Bat in Louisville, Kentucky, which was designed to be so big — 120 feet tall — that it could be seen from a nearby freeway. “City bureaucrats were aghast,” reports the Lexington Herald-Leader. “A huge bat would violate Louisville’s restrictive sign ordinance.”

Finally, a code enforcement officer asked [Bill] Weyland if it would be possible to vent plumbing up through the bat. Weyland was puzzled. “The guy then pointed out that there is nothing in the Kentucky building code that restricts the shape of a plumbing vent,” he said. Problem solved, new Louisville landmark created. 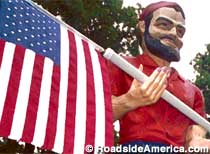 A similar solution was engineered in Cheshire, Connecticut, where a lumber store named House of Doors wanted to erect a lumberjack Muffler Man. The idea was thwarted by a local sign ordinance, so the House Of Doors replaced the lumberjack’s ax with a flag.  Presto-chango, the statue was now a flagpole — free of restrictive sign codes.

The House of Doors, in fact, recently purchased a second Muffler Man (formerly in Bridger, Montana), although they’re still unsure of its ultimate destination. “We don’t know yet where we’re gonna put it up,” a spokesman told us, “but we’re gonna put it somewhere!” As a flagpole? The spokesman wasn’t sure. “I don’t know if we can run that play again and have it work.”