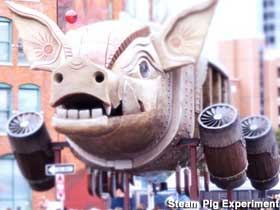 Like its predecessor, however, Steam Pig was popular with the public, so it’s being allowed to stand through the winter in the hope that a bankrolled benefactor will give the pig a permanent home. No one wants to see this tusked behemoth shipped off to the styrofoam sculpture slaughter house.

According to its creators, Steam Pig was built from the long-lost plans of a forgotten engineering genius of the late 19th century. Like all madmen, he was motivated to prove his critics wrong, specifically those critics who laughed that his ideas would only be accepted “when pigs fly.” In Steam Pig’s case, flight came from its mysterious mechanical internal gearing, and a set of four tilting turbines in place of its trotters. 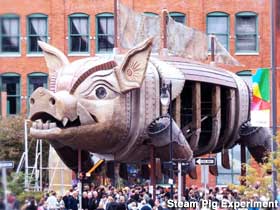 The alternate universe of Steampunk has inspired other works of public art; we can only hope the landscape will become even more Forevertronic.

First, however, Steam Pig will have to find a community that can appreciate a 47-foot-tall swine. Cincinnati? Or some hog-wild place in Arkansas?

Directions:
Steam Pig was removed by crane and disassembled on August 15, 2011. Its creators still hope that someone will purchase the mechaporker and re-erect it elsewhere.
Status:
Gone