Stonehenge II On The Move 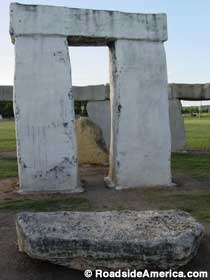 If you’re planning to visit Stonehenge II this summer in the hills near Hunt, Texas, you’re going to be disappointed. All 75 pieces of the Stonehenge — and its guardian Easter Island heads — are being hauled away and will soon be gone.

But not gone for good; not if David Cockrell, executive director of the Hill Country Arts Foundation in nearby Ingram, has anything to say about it.

“It’s not a definite that it’s moving here, but it pretty much is,” said David. “I just have to raise the money to make it happen.”

The Foundation’s plan — once David raises around $40,000 — is to truck the Stonehenge eight miles east into town, and set it up in an open field on the 15-acre campus near the softball fields and the Foundation’s Park Theatre. The megaliths and statues will be reinforced with concrete and rebar so that they can survive in their new downtown location. According to the Kerrville Daily Times, everything should be moved by September 30 — too late for the Autumn equinox, but in plenty of time for the Winter solstice.

David told us that the land underneath the Stonehenge had been sold, and its new owners “were just going to knock it over.” He’s no Druid, but he understands the drawing power of a Stonehenge, even if not everyone in Ingram realized what needed to be done. “A lot of people were saying, ‘Keep it where it is!'” he said. “But they didn’t understand that that’s not an option.”

(Contributions to save the Stonehenge can be made by contacting the Hill Country Arts Foundation through its Facebook page or at 830-367-5120.) [Thanks to AndrewB for the lead]

120 Point Theatre Rd S., Ingram, TX
Directions:
Relocated to the grounds of the Hill Country Arts Foundation. I-10 exit south into Kerrville. Turn right when you get to Hwy 27/Main St. Take Hwy 27 to Ingram (about 5 miles). At the second light in Ingram go straight through the intersection toward Hunt, which will put you on Hwy 39 (Hwy 27 will angle off to the right toward Mountain Home). After the light, watch for the Johnson Creek Bridge; immediately after the bridge you will see the sign for the Hill Country Arts Foundation on the left.
Phone:
830-367-5120
RA Rates:
Worth a Detour

13 Responses to “Stonehenge II On The Move”