It sounded great and a number of towns wanted it — a nearly-life-size Statue of Liberty, built for an online travel company’s sales convention, donated free of charge by its creators. Hammond, Indiana, won the battle for the Lady, and plans were laid to erect the 130-foot-tall styrofoam sculpture on an island in a local lake by July 4, 2009.

And then Liberty failed her inspection.

A structural engineer declared that the coated styrofoam would crumble under UV daylight. Its flimsy steel supports would buckle in the wind. The necessary upgrades would cost millions that Hammond didn’t have.

Hammond’s problems are not insurmountable. Other experts have successfully built monumental outdoor styrofoam replicas and big Statues of Liberty. Hammond could tap their wisdom to salvage its Green Lady (and if they asked us, we’d suggest spraying her with SPF 30 sunscreen). 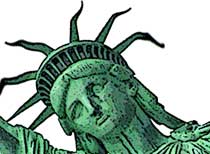 But according to an article in the Merrillville Post-Tribute, the town now wants to either give the statue back to the company that built it, or display only part of it at an Indiana Welcome Center. The windy island, according to a Post-Tribune blog, will become home to an austere and practical wind turbine.

For the Visitors Center, maybe Hammond could lop off the top of the statue, melt it a little, and recreate the closing scene from the original Planet of the Apes? It would make for a one-of-a-kind photo op….