Eating in a restaurant where the fun tops the food may have begun in tiki bars, developed an unhealthy popularity at Disneyland and World restaurants, and then veered into surreal excess in the 1970s with the opening of Casa Bonita. By the mid-1990s “eatertainment” was hot, with various companies selling “concepts” that could be internationally franchised around an overpriced menu and a gift shop. 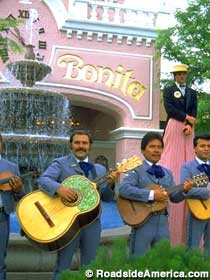 The bubble burst in 1998-1999, when most of the eatertainment restaurants went out of business. Their themes were as lame as their food — Television City, Motown Cafe, etc. — but the notably excessive went belly-up as well, including Marvel Mania (dining inside a comic book), American Wilderness Experience (eat in a mall surrounded by 160 wild animals) and Holoworld (“futuristic family feast and fun”). Only a handful, such as Mars 2112 and the Jekyll and Hyde Club, survive.

Eatertainment, however, may be making a comeback. According to the Las Vegas Sun, the just-opened Encore Casino has a restaurant named Switch, in which the entire staff switches clothes several times a night and:

“Diners can watch as the walls of the restaurant retract into the ceiling and a new wall decor descends. The spectacle, which includes three wall settings and two ceiling changes, repeats every 20 to 30 minutes.”

Switch offers a more refined and upscale version of what once was promised in places like Star Voyager (a restaurant that pretended to be a 23rd century space station) and David Copperfield’s Magic Underground ($30 million to build, and it never opened). But the idea is the same.

We suggest visiting it immediately, before the cams and gears in the floor and ceiling freeze up.