Trundle Manor in Swissvale, Pennsylvania, is the self-described “art house/tourist trap” — and home — of artists Mr. Arm and Velda. They are welcoming hosts with so many strange stories to share that they couldn’t all fit into our Trundle Manor Field Report. Here are three more:

The Former Owner of Trundle Manor 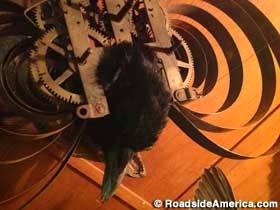 According to Mr. Arm, the house — which he bought abandoned — had previously been owned by a man named Charlie: a compulsive hoarder and shut-in.

“Charlie was found in what is now our bedroom, on Velda’s side of the bed,” said Mr. Arm. “He had apparently taken his own life with a shotgun, a bag over his head, and the house filled with natural gas.” However, Mr. Arm talked with the fire chief who found Charlie, “and he said, ‘I don’t think it was suicide. I think it was part of the gay prostitution ring in Swissvale.’ I’ve lived in Swissvale my whole life, and that’s the only time I’ve ever heard of that.”

“We badly want to say that this house is haunted,” said Velda, “but we’ve never seen anything.” Mr. Arm added, “Charlie’s left us alone. Either he likes what we’re was doing because we’re collectors, or he’s terrified by what we’re doing.”

According to Velda, her favorite item in Trundle Manor is displayed in the parlor: a taxidermy tableau of two squirrels dressed as a bride and groom. 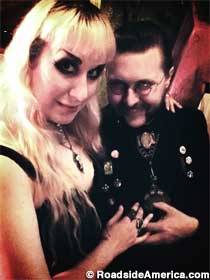 “The first time I came to the house I said, ‘This is like a very sexy funeral home;’ I didn’t want to leave,” said Velda. “He let me in and said, ‘I’ve got a freezer full of dead squirrels; do you want to learn taxidermy in my basement?’ And that was our first date. He never thought I’d say ‘Yes’ to that, but I never thought somebody would want me in their basement cutting up dead stuff.”

The squirrels, Velda added, are going to be the toppers on her and Mr. Arm’s wedding cake.

There are lots of jars of dead things in Trundle Manor, most of them “packaged” by Mr. Arm and Velda. “Both of us grew up watching old horror movies,” said Mr. Arm, “and in the background of old horror movies are all these things floating in jars: eyeballs, hands. I thought that was normal.” 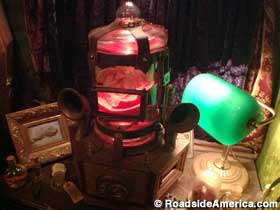 Not only normal, but beautiful. “They’re like my own stained glass windows,” said Mr. Arm. “Things in fluids are more fascinating to me than seeing anything alive. I like inanimate things. The Manor has all these dead things I can take pictures of.”

According to Mr. Arm and Velda, their favorite item in the Trundle Manor gift shop is its octopus tentacle necklace, each one featuring a tiny tentacle inside an equally tiny jar.

“They’re preserved in the same fluid used to preserve the giant squid in the London Museum,” said Mr. Arm. “The curator taught me the formula.”

Sections: Places Comments Off on Tales from Trundle Manor

7724 Juniata St., Swissvale, PA
Directions:
South of Pittsburgh on I-376. After the Squirrel Hill Tunnels take the first exit and stay right toward Swissvale. Turn left at the stop sign, right onto South Braddock Ave., left onto Westmoreland Ave., then right onto Columbia Ave. Trundle Manor is on the corner of Columbia Ave. and Juniata St.
Hours:
By appt. (Call to verify) Local health policies may affect hours and access.
Phone:
412-916-5544
Admission:
Donations of cash or exhibits welcomed.
RA Rates:
Major Fun